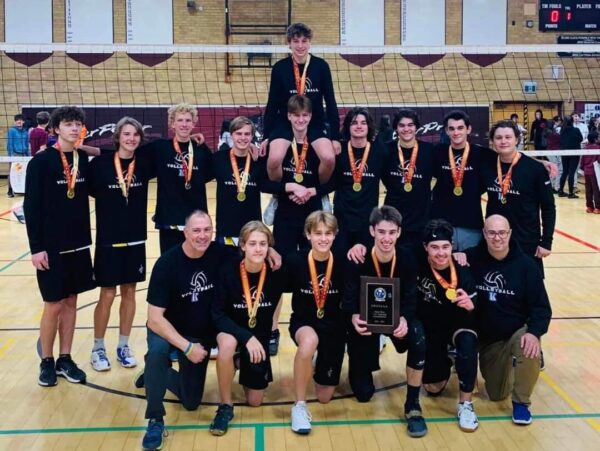 On Wednesday, the Senior Boys Volleyball team travelled to Chatham to play in the SWOSSAA championship versus the John McGregor Secondary School Panthers.

The boys came early and were determined not to stay late. They followed the game plan of serving well, committing to defence, and maintaining humble confidence.

Ty Murray’s setting was on point while Wes Long, Ian MacPherson, Matt Mayhew, Luke Lear and Daniel Fehr were putting the ball away to take an early lead.

They never looked back!

The boys played very well all night long with consistent blocking and kills. They defeated the Panthers in 3 straight sets, winning the SWOSSA championship and earning themselves a spot in the OFSAA Championships later this week in Huntsville.

Congratulations to all the team members for two excellent championship evenings.

The team would like to thank Mr. Toews and the KDHS staff and student body who drove to Chatham to support them and witness this historic event.