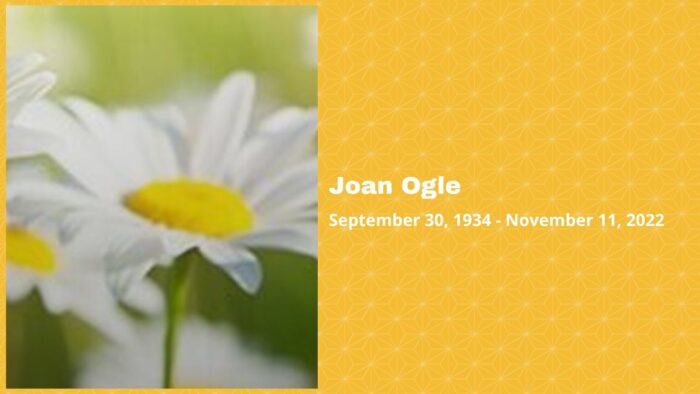 Joan Ogle of Strathroy and formerly of Kingsville, Ontario, passed away peacefully at the Strathroy General Hospital on November 11, 2022 at 88 years of age. Joan was born in Saskatoon, the youngest of seven children born to Edwin and Agnes Bocking.

After earning her Bachelor of Science degree at the University of Saskatchewan and becoming a Registered Nurse, she came to Windsor to teach nursing at the Metropolitan Hospital School of Nursing, where she became the Assistant Director. She was on the Faculty of Nursing at St. Clair College for many years and later at the University of Windsor, retiring in 1995. Then she devoted much time to church work (pastoral care).

Joan is survived by her husband Jerald (Jerry) with whom she celebrated almost 60 years of marriage; daughters Jean Braun and Margaret Hampshire; son-in-law Alan Hampshire; grandchildren Carson, Justin and Nicholas Braun and Alaina Hampshire Buchanan and Elsie Hampshire and two Buchanan great-grandsons. She is also survived by her sister Olive Mortensen in Brandon MB and many nieces and nephews.

Special thanks to Dr. K. Carter and his residents and Paula NP, neighbour Donna and the loving, caring staff at the Strathroy Hospital.

A graveside service will be held in Greenhill Cemetery, Kingsville, on Thursday, November 17 at 1:30 p.m. with the Rev Bryan Girling officiating.

If desired donations in Joan’s memory may be made to The Church of the Epiphany, 106 Main Street West, Kingsville ON N9Y 1H3 or a charity of your choice.

Donations are being accepted for: CHURCH EPIPHANY (CHURCH OF THE EPIPHANY).