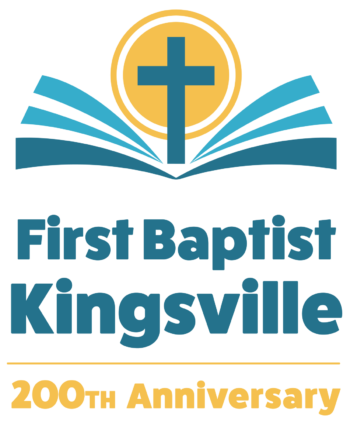 This begins a year-long celebration that will culminate on the church’s 200th Anniversary, Sunday, November 19, 2023.

In the early 1800’s, Reverend Herrington travelled on horseback to serve his parish which extended from the Detroit River to the vicinity of St. Thomas. Many Baptist congregations in the Essex-Kent territory were organized with his assistance and counsel during his more than fifty years of ministry.

In 1847, Herrington’s son-in-law Alex Augustine built the first church on the property where First Baptist now stands — the corner of Division and Water Streets. That church was of frame construction with a seating capacity of three hundred.

In 1907, a parsonage was built beside the Church at a cost of $2,250. In 1920, the Church was raised and a basement was built for Sunday School use. In 1948, a hall was added to the Church to provide more facilities. The building fund for that hall began with a $25 donation from the Ladies’ Aid.

A further hall was added in 1958 to provide better accommodation for mid-week groups and the facilities were again extended in 1965 with the addition of a large kitchen and nursery.

The Associational records in the 1800s show other things about the Church — there were times of revival as well as time of disappointment. One letter in the 1870s told that there was no spiritual life in Kingsville and that the cause was hopeless.

Yet, in 1880, it is recorded that a better day had dawned with baptisms and additions. In the 1890’s the Brooker Church near Cottam, founded by one of Herrington’s sons, associated with Kingsville.

The various ministers throughout the years resided in Kingsville but served the congregations of both Kingsville and Brooker. In the years that followed, both churches grew steadily and, in 1960, Brooker indicated its ability to prosper alone.

In 1973, the young people’s group felt a new church building was needed and they started a church building fund with their donation of $200. God honoured the commitment.

In May of 1975, the former sanctuary and parsonage were demolished and work on the new building was begun.  In March 1976, the members and friends of the congregation dedicated the new sanctuary and auditorium to the glory of God.

The story of the church building as it exists today is not unlike the story told in the historical records. The current church structure had an addition in the 1990s to facilitate administration needs. It has undergone major remodels twice since its opening in 1976 to make it viable for the needs of the congregation and the community in which we minister.

Over this next year, its 200th year as First Baptist Church Kingsville, the people who worship at First Baptist are committed to becoming fully devoted followers of Jesus Christ and to inviting others to do the same.

As with much of the world around us, First Baptist Church has learned to change and adapt to meet the times we live in and the people we live with, in this community.

We continue to gather on Sunday mornings for a time of worship for all ages. Both men and women have weekly prayer groups and times of Bible study. Other groups meet throughout the week for study and fellowship as well.

Every week, on Thursday evenings, we gather for a family focused meal and then a time of learning and growth for all ages. On the third Wednesday of each month, food and fellowship are free at our Community Dinner.

Please watch our website or our Facebook page for upcoming events celebrating 200 years of serving God’s Kingdom and the community in Kingsville.

No matter your age or your background, all are welcome to join us on the journey. To God be the glory!