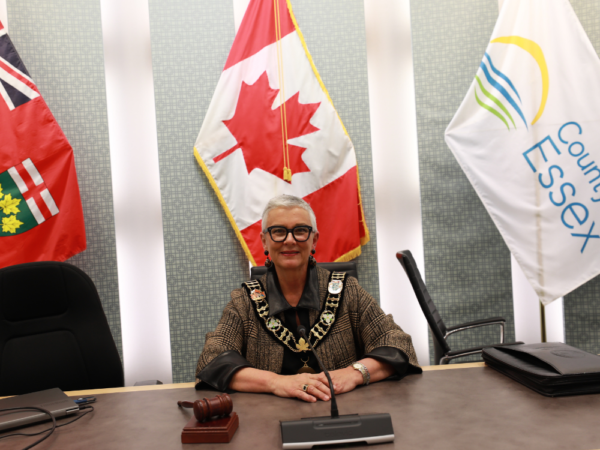 Leamington Mayor Hilda MacDonald was elected Warden of Essex County Wednesday night, becoming the first woman to hold the position since it was established in 1853.

“Look at the diversity around this table. The time is right. The population of the region has shown that they are ready for diversity, they are ready to have themselves represented at this table,” said MacDonald in her opening remarks as Warden. “It’s no longer just one demographic. Skin colour, gender, age, all of those things are represented at this table and I’m proud to be elected by you, my fellow colleagues.”

MacDonald vied for the position against Tecumseh Mayor Gary McNamara, who served as Warden from 2018 to 2022. MacDonald won on the first ballot, securing a majority of the votes. As is customary, the breakdown of the votes was not released, the ballots were destroyed and Council voted to declare her victory unanimous.

MacDonald praised McNamara for his work as Warden and thanked him for his support and guidance. She said she is keen to work with her colleagues and that the pandemic illustrated just how important it was to think strategically and for the local municipalities to work together.

“Let’s get the job going and enjoy the next four years,” said MacDonald. “Let’s be productive, let’s work as a team, let’s be engaged like never before.”

MacDonald was elected Mayor of Leamington in 2018 and again in 2022. Prior to that, MacDonald served one term as Leamington’s Deputy Mayor and for two terms as a Councillor. She serves on the Association of Municipalities Board of Directors and the Ontario Small Urban Municipalities Executive Committee.

MacDonald, 69, is a lifelong resident of Leamington. Prior to politics, she ran her own business while raising her children. She is married to her husband, Doug.

“The incoming Warden has a talented and dedicated team to work with here at the County of Essex,” said Essex County CAO Mike Galloway. “Our staff is committed to working with the Warden and the incoming Council to continue offering quality services to the residents of Essex County.”

Bachetti has served on Tecumseh Council for 28 years and also works as a principal for the Windsor-Essex Catholic District School Board. He served as a Town Councillor from 1994 to 2014 and was elected Deputy Mayor in 2014, 2018 and 2022.

Of the 14 Essex County Councillors sworn in Wednesday night by the Honourable Mr. Justice George W. King, eight are new and six are returning.

The first regular meeting of Council is set for Dec. 7 at 4 p.m., when Councillors will deliberate the 2023 Budget. The next meeting is scheduled for 6 p.m. on Wednesday, Dec. 21. 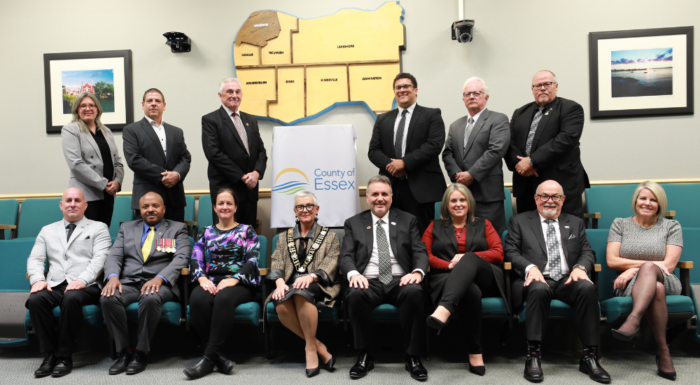