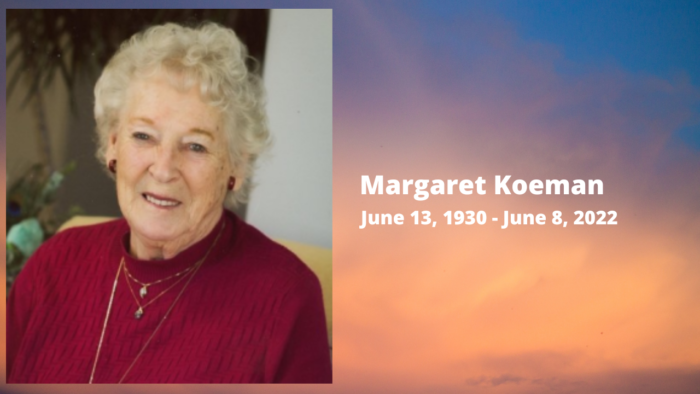 On Wednesday, June 8th, 2022, our dear mother passed away peacefully in Kingsville, surrounded by her children. She was just a few days away from her 92nd birthday.

She is predeceased by her husband Dirk, who passed away in 2006 and is survived by her 5 children; Linda, Debbie, Frederick (Renata), James (Linda) and Richard (Vicky); grandchildren Kyle (Monica), Matthew (Jenna), Simon, Jacob and Anika, and great-grandchildren, Mathilda, Nora, Adeline and Oscar.

Margaret was born in Heemstede, Netherlands on June 13th, 1930 to Jacobus Buis and Mathilda Galama. She had 5 sisters (Cor, Annie, Lida, Riet, Tilly) and 1 brother (Nicolas) who have also passed away; her oldest sister Cor most recently in March, 2022.

She spoke often of her close relationship with her father, however that ended suddenly on May 8th, 1945 when her father was killed while she was at a celebration of the end of WW2.

On April 13, 1955, she arrived in Canada to wed our father. They immediately got married in Leamington Ontario, settled in Wheatley, before moving to Kingsville in 1969. Mom was an extremely hard worker who managed the children, the house, and the finances.

She loved Canada and her Kingsville community and had many friends. Her passion was playing cards and really enjoyed being a part of the Kingsville Bridge club.

The family would like to thank the incredible staff at Chartwell Royal Oak Long Term Care Residence in Kingsville, Ontario for their care and support during our mother’s last days.

At this time no service has been planned.