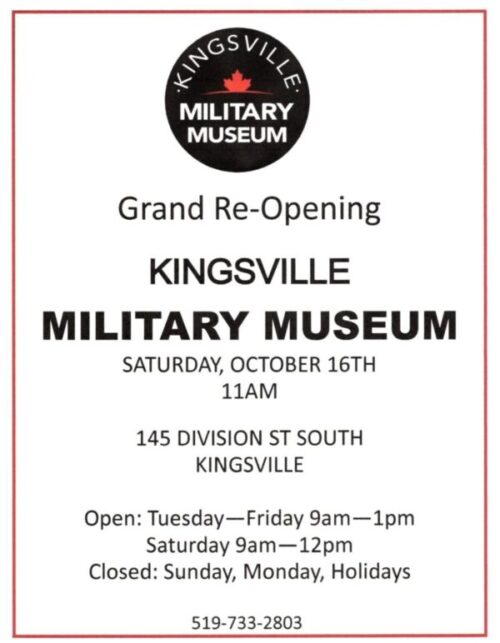 Back in 1987 a group of veterans from the Kingsville Legion Branch 188 held a Memorabilia Night to showcase local history and their service during the war. From this response an idea expanded from a one-time event into a more lasting presentation.

A semi-trailer was donated to the legion and a group of veterans outfitted this trailer to house the collection of uniforms, medals, and other memorabilia. This Mobile Museum was hauled to schools and to fairs.

The collection grew to be so much that an old warehouse which was on Legion property was refurbished as a museum from 1992 until 1997. When the members were advised that this building had structural defects it was decided to construct a new building. In August 2000 the new Kingsville Historical Park Inc. was opened. This Park included the museum, a range light, a caboose and a fishing tug.

Today all that remains is the museum.  That is why we have re-banded the museum as Kingsville Military Museum to showcase the military history of veterans from Kingsville and surrounding area. There are artifacts from the Boer War, WWI, WWII, the Korean War and the Afghanistan War.

You will also find a collection of farming and household items, Kingsville memorabilia, and a display board of historic houses in Kingsville.

At our Grand Re-Opening we will be presenting the new name along with the new logo.

WWII Veteran Charlie Campbell penned this statement which is posted in the museum:

“We do not glorify the acts of war, but remember the consequences and the cost of freedom.
Future generations must learn about man’s inhumanity to man so they in turn, will value man’s humanity.”

We are Closed:
Sunday, Monday and holidays

Admission is by donation.

Any donations by cheque should be made out to Kingsville Historical Park Inc. as that is still our official name.

I hope you will be able to come and visit us soon.