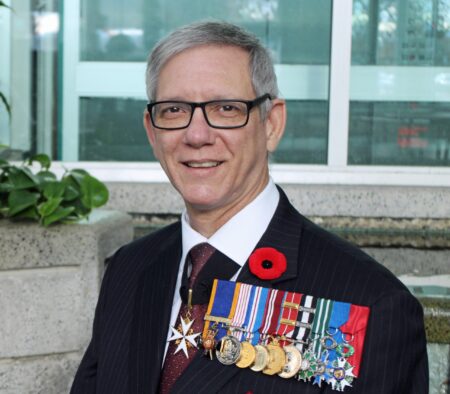 Whenever André Levesque walks by the National War Memorial in his native Ottawa, he lays his hands on the tomb of the Unknown Soldier. “My body feels warm and glowing,” he says, “like I’m going through something very emotional. It’s amazing.”

Levesque’s deep personal connection to the monument was sparked when he worked as the project manager for the repatriation of the soldier’s remains. He led the team that chose the unidentified Canadian from a cemetery near Vimy Ridge, had the remains flown over from France, and reinterred them, at a ceremony in 2000 attended by some 20,000 people. Shortly thereafter, he project-managed the establishment of the National Military Cemetery at Beechwood in Ottawa, where he is now chief historian. His citation for the Order of Ontario, to which he was appointed in 2020, notes that he is a “pioneer of memorialogy, the study of memorials and commemoration.”

Levesque became fascinated by veterans’ stories, and the need to preserve them, when he joined the Canadian Army Reserve as a high school student in 1974. He met veterans of the Korean war and the Second World War: “These soldiers were doing hard work—liberating, going through Italy, France, The Netherlands, being shot at, being wounded. When they pass away, you’re trying to achieve your own closure, from having met them to remembering them.”

In 2001, Levesque set up the National Inventory of Canadian Military Memorials; currently, it lists over 8,200—more of which are in Ontario than any other province. He also runs the website memorialogy.com, in his capacity as chair of the International Society for Commemoration, Memorials and other Monuments. Together with contributors from North America, Europe, Australia, and New Zealand, he delves into, and writes about, the history specific monuments represent—related not only to war, but also to such diverse areas as sports, medicine, the environment, and race relations. “I’m super-interested in putting together the fabric of the history of Canada, involving all kinds of aspects,” he says.

Today, Levesque is putting his research into practice: he co-leads the team that has commissioned, designed, and overseen the construction of the new Amicitia France-Canada monument in Beechwood Cemetery. It recognizes the shared history, heritage, and diplomatic relations between the two countries, and will be officially unveiled in the coming months.

“We wanted the community to feel there’s part of themselves in there,” he says. Community involvement, Levesque explains, is crucial to monuments’ relevance and longevity. For many of them across Ontario, maintenance can be a challenge, particularly when the local associations that commissioned their construction have themselves faded away. “We’re hopeful that local schools and municipalities will encourage their citizenry and the youth to be involved with activities that include remembrance and commemoration,” he says. “That doesn’t mean that you have to commemorate war—we’re talking about remembering the people.”

On November 11, as Ontarians gather throughout our province, let us build on the community spirit that has inspired the creation of so many memorials. Let us reflect on how learning and sharing the stories of those who serve, and each other’s stories too, will help foster the empathy and understanding upon which we can build a more just and resilient society—one that is worthy of our soldiers’ sacrifice.