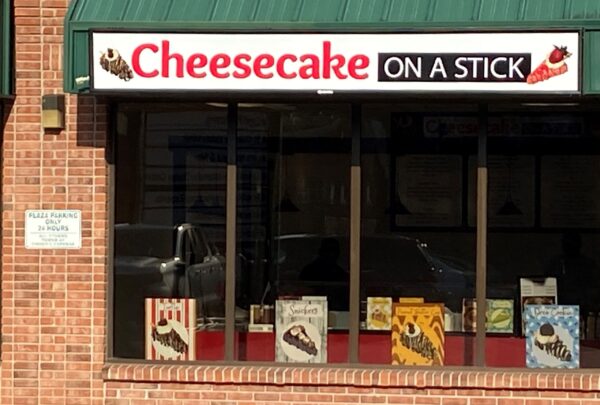 Hello Friends, I was really crestfallen a few weeks back while driving through Kingsville. Why? Well, let me tell you. It’s because I saw that Cheesecake on a Stick had closed … before I even had a chance to try it! How tragic.

I have always enjoyed foods served on a stick — corn dogs, popsicles, shish-kabobs, candy apples — I’ve been a big fan of flavour and portability since I was young. What can I say ? I‘ve always enjoyed multitasking. I once ate an entire foot long chili cheese dog while driving my stick shift VW. Not a single bean lost either. True story. 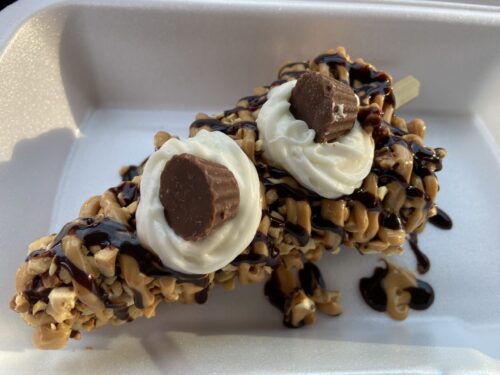 So, again, I was sad to see that Cheesecake on a Stick had closed without me ever having crossed its threshold.

Fast forward a few weeks when I was out in Kingsville on a Saturday night with my older sister ( haha, sorry I had to) and her husband, and of course, Steve.

And what appeared before me that mystical night downtown Kingsville? As though I had conjured it from my own delicious imagination? Cheesecake on a Stick! They hadn’t closed — they moved. Silly me.  Although elated, I was still bursting from my dinner, so I vowed to return soon. 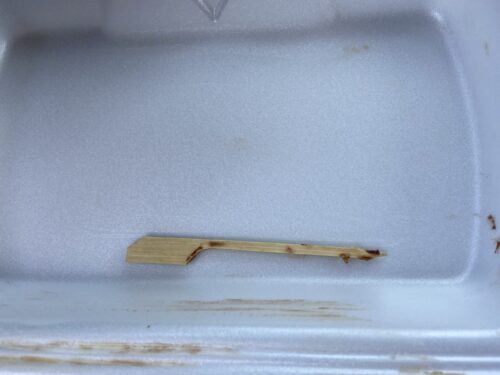 When the Universe gives you a second chance, it’s not wise to squander it. And I typically heed such things. So, when I got there two days later, I ordered the Peanut Butter Cup Cheesecake. Believe me it was a tough choice though, as the selection was excellent.

I knew I made the correct choice when I tasted it — cool, creamy, peanut buttery, and chocolatey… Mmm. Rich and sweet, but not cloying, plus it was big enough to share — which I didn’t.

For $7 you can more than satisfy the sweet tooth of two people, and that’s just good value.

Thank you Cheesecake on a Stick for not really being closed, just moved. And thank you for the amazing treat that was delicious and portable, two of my favourite things.

If you’ve yet to try Cheesecake on a Stick what are you waiting for ? Really though?

Cheesecake on a Stick
17 Main Street West
Kingsville, ON.