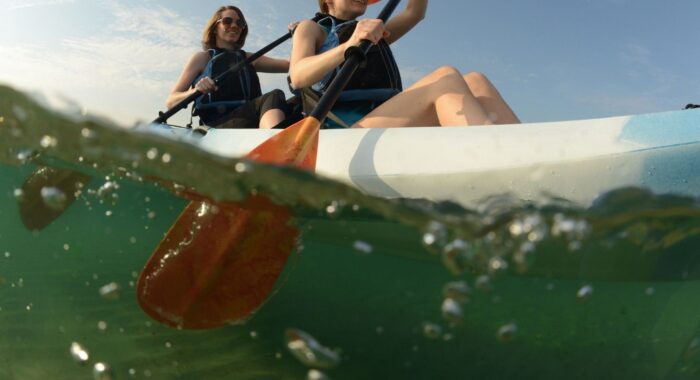 Essex County, ON — Athletes of all ages are preparing to push their limits as they wingfoil, stand-up paddleboard (SUP), canoe and kayak Lake Erie on Saturday, August 28th. The 4th annual Lake Erie Challenge, hosted by the Canadian Freshwater Alliance, with support from community partners Pelee Island Winery and Pelee Wings Nature Store, will see three teams cover a combined 80km, to raise awareness and funds to protect this precious freshwater ecosystem.

• Team SUP will paddle 25km from Kingsville to Leamington.
• Team Wingfoil will surf 25km from Kingsville to Pelee Island, where they will be greeted by a community celebration, before surfing the 25km return crossing to Leamington.
• Team Caldwell will join Team SUP and Team Wingfoil for the final 5km, paddling them in for the final stretch of the Lake Erie Challenge. Team Caldwell is composed of Caldwell First Nation youth, members, staff and elected councillors.

The athletes have teamed up with the Canadian Freshwater Alliance to support the Lake Erie Guardians, a program dedicated to improving the health of the Lake Erie watershed. These community scientists conduct monthly water quality testing, remove invasive species, reintroduce native plants, and educate and advocate for measures that will protect Lake Erie and its rivers. Of particular concern are the toxic algal blooms that threaten Lake Erie every summer, especially in the western end of the lake where this year’s event is being hosted.

“While a smaller-than-average bloom has been predicted for this year,” said Raj Gill, the Great Lakes Program Director with the Canadian Freshwater Alliance. “It is already 360 square miles in size. It stretches from Monroe, MI to Marblehead, OH and out to the islands just west of Pelee Island. If it moves further east towards Pelee Island, we will have to re-evaluate Team Wingfoil’s planned route.” Cyanobacteria, or blue-green algae can produce toxins that are harmful to humans.

For more information, or to make a charitable donation, visit LakeErieChallenge.ca

WHERE:
Cedar Beach, Kingsville | 8:45am-10am*
• Cheer on Team SUP and Team Wingfoil as they launch into Lake Erie (9am launch).

Seacliff Beach, Leamington | 10:30am-12pm*
• Cheer on Team Caldwell as they launch into Lake Erie to paddle the final stretch with Team SUP & Team Wingfoil (anticipated launch is between 11am-12pm)

Scudder Beach, Pelee Island | 10am-12pm
• Cheer on Team Wingfoil as they arrive on the Island, and join them for lunch.
• Join in on the island celebrations with good food and beverages, free crafts, beach clean-up, taste some island-grown grapes and learn about sustainable winemaking. Festivities hosted by Pelee Eco Works, Pelee Art Works, The Taco Shack, Pelee Island Co-op, The Wandering Dog Inn, The Filling Station, and Pelee Island Winery.

Local Lake Erie Guardians and project partners, The Water Rangers, will be conducting water testing demonstrations at each location.

*Please note that exact event timing may vary and is dependent on day-of weather conditions for the athletes. Follow along on our social media channels for day-of updates.

In case of inclement weather, activities will be moved Sunday, August 29th.

The CANADIAN FRESHWATER ALLIANCE builds, connects and supports freshwater initiatives across Canada. We work with NGOs, community groups, governments and businesses to strengthen citizen voices and participation in protecting our lakes and rivers. We are a project on MakeWay’s shared platform.