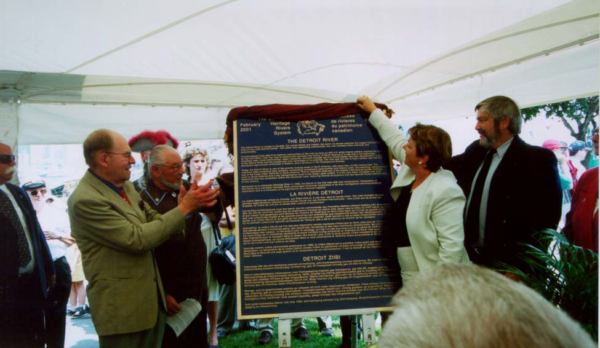 Windsor, ON –  It’s hard to believe that two decades have passed since the Detroit River became the first and only river in North America to be designated as a Canadian and American Heritage River. On this day 20 years ago, dignitaries from the across the region joined then Deputy Prime Minister Rt. Hon. Herb Gray, Minister of Canadian Heritage Sheila Copps and others as singers from Walpole Island provided traditional Indigenous music to help celebrate this momentous occasion.

The Essex Region Conservation Authority led the robust process over the five year nomination effort. Hundreds of community members were engaged to create a comprehensive background report of the river’s history from a cultural heritage, natural heritage and recreational perspective.

“As the busiest international crossing point in North America, the Detroit River was unique to the Heritage River system, which was mostly known for its pristine rivers,” recalls Danielle Breault Stuebing, ERCA’s Director of Communications. “However, the rich cultural heritage which includes the river’s important role as a terminus in the Underground Railroad, it’s importance to our military history, colourful rum-running stories, and of course, it’s value to Indigenous peoples from time immemorial, elevated its status.”

From a recreational perspective, the river features a world class fishery, and is known around the world for its walleye in particular. The Detroit riverfront promenades that have been created across Windsor, LaSalle and Amherstburg highlight the river’s recreational draw for the region.  At any time of day, people fish, bike, run, boat, walk and play along the river. The publically accessible shorelines, trails, docks, marinas, viewing platforms and boardwalks offer outstanding opportunities for residents and visitors to enjoy sightseeing and participating in bird watching, angling, exercising and nature viewing. 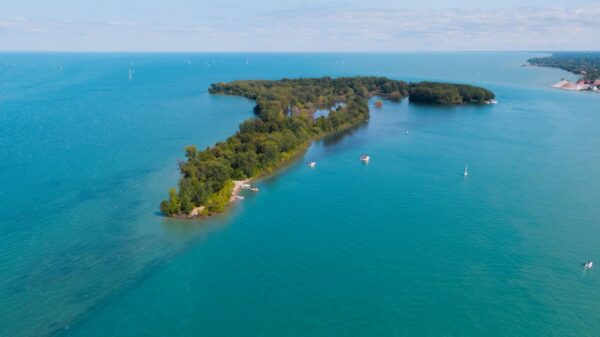 The Detroit River at Peche Island

There are many signs that these efforts are truly restoring the river. A variety of plants and animals call the river home, and we are seeing the return of Bald Eagles nesting, feeding and living in different locations along the channel and in the watersheds. Lake Sturgeon, a fish species at risk, has had a population rebound in the river. In fact, just a few months ago, a 240 lb, 100 year old Lake Sturgeon was caught in the river.

This stewardship recognizes our collective responsibility, and protecting the river supports the fact that it is a drinking source for 5 million people on both sides of the border.

“There’s no question that the Detroit River is an incredibly valuable resource to our community and that in many cases, it defined our region’s growth, and continues to provide for new opportunities,” Stuebing goes on to say.  “Together with the regional community, the heritage values for which the Detroit River was designated continue to be conserved, enhanced, and appreciated.”

Over the coming months, several new initiatives to highlight these values will be released, included adventure itineraries in partnership with Tourism Windsor-Essex-Pelee Island for those who wish to explore the river’s natural, history and activities. A tree planting celebration will also be hosted within the watershed this fall, and over the coming months, a comprehensive report detailing all of the actions taken to protect and improve the River’s heritage values will be completed.

The Essex Region Conservation Authority is a public sector organization established by the Province in 1973, and governed by local municipalities, to provide for the organization and delivery of programs and services that further the conservation, restoration, development and management of natural resources in watersheds in Ontario.