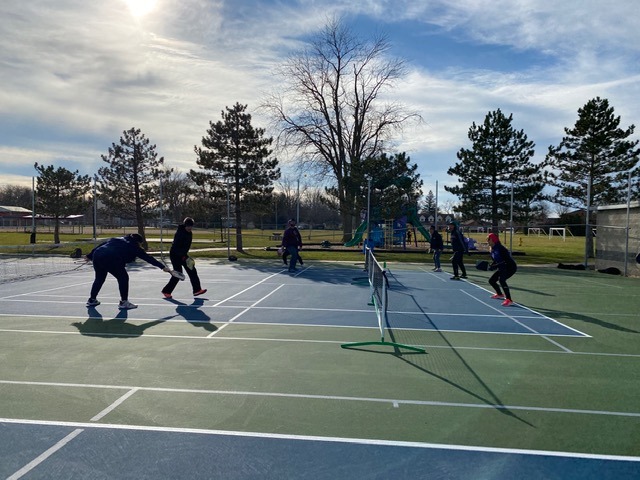 On May 14, 2021 ground was broken for Kingsville’s new Pickleball and Bocce Court Complex at the Kingsville Arena at 741 Jasperson Drive. This has been a triumph for all those who have worked so diligently for so long to bring their dream to reality.

In 2013, Kingsville residents Jude and Wayne Halpert joined forces with Jules and Mary Kay to bring pickleball to town. With the help of the Kingsville Tennis Association and the Town Council, they arranged for pickleball to be played on the tennis courts.

In 2020,  Cottam’s Ridgeview Park courts provided access to eight courts with portable nets. And now in 2021, the Town of Kingsville will have eight dedicated pickleball courts as well as those eight shared courts in Cottam.

Mayor Santos, Deputy Mayor Queen, Manager of Municipal Facilities & Property Dan Wolicki and representatives from Kingsville Pickleball Inc. were all on hand today to celebrate the announcement of the new pickleball courts.

Kingsville Times:
What is the history of pickleball?

Helen Dean:
Pickleball originated in 1965. In reading up on the history of its origin you will find the stories of the game being invented at the home of the Pritchards on Bainbridge Island near Seattle on an old badminton court. There were four families that typically got together regularly, the Pritchards, Bells, Browns and McCallums.

KT:
Why did it originate, given people were already playing tennis?

HD:
One poor weather day in the summer the children were bored so the dads pulled out some old badminton equipment but could not find a full set of rackets or a shuttlecock. They improvised and started playing with ping-pong paddles and a perforated plastic ball, volleying the ball over the badminton net.

In finding that the ball bounced well on the asphalt they lowered the net to 36 inches. This game continued with the families and the adults created rules, relying heavily on badminton. You will find that there are many similarities to tennis as well making it a combination of the games. They kept in mind the original purpose, which was to provide a game that the whole family could play together.

KT:
Why is it called pickleball?

HD:
As for the name, there are varying answers to how this name came about. Again, in looking up the history you will find that according to Joan Pritchard it was called “pickleball” because the combination of different equipment being used to play reminded her of the pickle boat where oarsmen were chosen from the leftovers of other boats.

According to Barney McCallum, you will read that he states the game was named after the Pritchard’s dog Pickles, who would chase the ball and run off with it. Regardless, in time as the game progressed, the official name of “pickleball” was given to the game.

You can find interviews online with Barney McCallum which are fun to watch and hear about the start of this most enjoyable game that is fun for all ages to play! 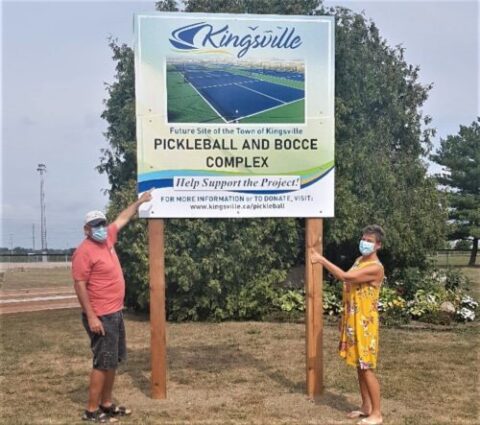 KT:
How does it differ from tennis?

HD:
In asking the difference between pickleball and tennis, there are a few. The court size is smaller for pickleball and the net slightly lower. In pickleball the serves are all underhand and must be cross court with quite a different scoring system.

You will most often see pickleball being played doubles, however there are certainly singles played. In pickleball smaller paddles are used and the balls are made of plastic, having holes to allow the ball to travel through the air.

It is said that a varied combination of tennis, badminton and table tennis make up the exciting game of pickleball. Pickleball is a game that can be played by all ages and all ability levels.

KT:
How long has pickleball been played locally in Kingsville?

HD:
In the winter of 2013, two of our founding members, Kingsville residence, Jude and Wayne Halpert were taught the game of pickleball in Florida. Upon their return to Kingsville, they tried playing in their driveway with some neighbours.

However, it wasn’t until a few weeks later, when they met two other Kingsville residents, Jules and Mary Kay at the Senior Expo show at the Kingsville arena, that things would kick into high gear.

The four of them decided to make it their mission to bring pickleball to the Town of Kingsville. Initially they approached the Kingsville Tennis Association and with the support of the Town Council, a schedule was set for pickleball play on the tennis courts.

The sport of pickleball was clearly becoming more and more popular, truly the fastest growing sport in North America! We continued our play on the four tennis courts throughout the 2019 season. 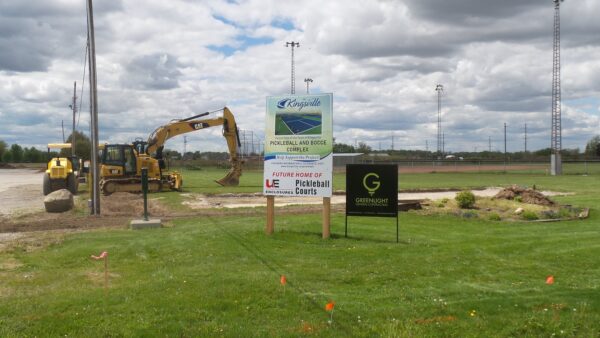 With our continued growing numbers, KPI was in desperate need of more courts and playing time in order to accommodate our players. At the start of the 2020 season, The Town of Kingsville resurfaced the Ridgeview Park courts in Cottam and we had access to eight courts with portable nets for play while we awaited the build of our dedicated courts here in town.

The spark of four truly dedicated community-minded players set in motion a wonderful addition to the town of Kingsville! With their unending hard work and dedication, along with many other KPI members to follow, in collaboration with the Town of Kingsville, eight years later the town will have eight dedicated pickleball courts here in town and eight shared courts in Cottam!

What an accomplishment that started out much like the original game back in 1965 — with four players in driveways who wanted to bring the fun of this game to all in the community.

KT:
What is the name of your club and how many members do you currently have?

HD:
Our club is called Kingsville Pickleball Inc., or KPI for short. We are quickly growing with close to 130 members. With the new courts being built here in town as we type, we are certain that our membership will continue to grow!

KT:
Is pickleball an expensive sport to participate in? What equipment is required and where does a player find this equipment?

HD:
To play pickleball you need to show up to the court with a paddle and ball. Of course a net as well if there is not one at the court. There are portable nets which can be purchased and easily transported. The courts here in Kingsville will have permanent nets on site.

Paddles, as in any sport, can range in cost from lower to highly expensive, depending on your preference. For example, wooden paddles may cost between $15- $40 while composite and graphite paddles can cost between $60- $250-plus. 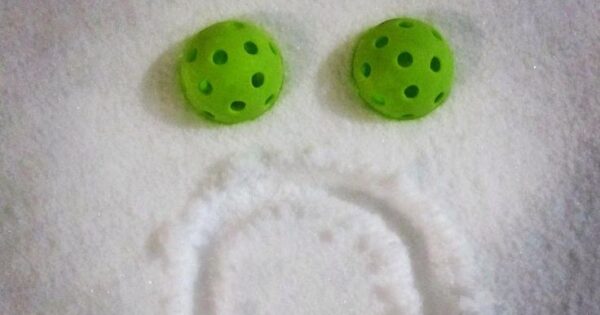 In the realm of sports and fees, pickleball is definitely a lower-cost sport to play, and can involve people of all ages and ability levels. There may be club membership fees and court fees paid to the town such as with our club which are nominal in comparison to the cost of playing other sports.

The equipment can readily be purchased online through pickleball sites or in sporting goods stores.

KT:
How many courts are being built in Kingsville? When will they be ready?

HD:
There are eight dedicated pickleball courts being built in Kingsville. It is hoped that the courts will be ready for use this summer — perhaps at the start of July.

Of course the factors of weather and the impact of the pandemic play a part in the construction and the completion of the courts.

Until they are ready, once we are able to access the courts again, we also have the eight courts at Ridgeview Park in Cottam where we will play.

KT:
Will these courts be open to the public or to members of the club only?

HD:
The courts will have a combination of hours both for the dedicated use by KPI members and open to the public as well.

If the clubs are open to the public, what are the hours of operation?

HD:
The hours of operation and scheduling are currently being set as well as fees. More information will be posted on our Facebook site and the Town website once this has been set. 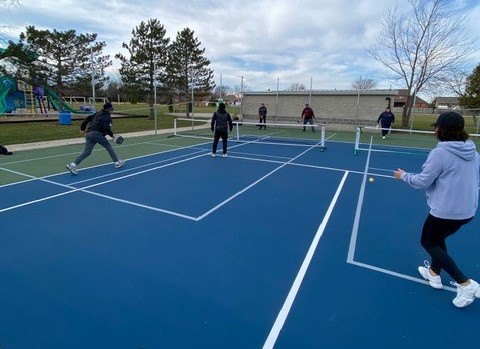 Fun on the court

What would you say to someone to encourage them to try it out? Are there health and social benefits to playing this sport?

HD:
The sport of pickleball is a fun game to play for all ages at all ability levels. Our club encourages new members who may have never picked up a paddle to come and try it.

We welcome all to come out and let us teach you how to play. It is an opportunity to not only involve yourself in a fun form of exercise but also to meet new friends and socialize.

There are many who play simply for the fun of this recreational sport and others who like to be more involved in competitive play. The sport is one where all ability levels are able to find a niche for play!

If someone is interested in joining your club, how much does it cost and how do they reach you?

HD:
I would highly encourage anyone interested in joining the club to contact us via email at kingsvillepickleball@gmail.com. Of course our Facebook site is a way to find out further information about our club as well at Kingsville Pickleball Inc.

Helen also wants us to recognize and thank the many donors and the Town of Kingsville who have made this a reality.

“Our fundraising committee along with our members have worked tirelessly to raise funds for the cost of the new courts. We are so grateful to have raised just over $80 000 to date. Our fundraising will continue to further support the cost of this build. We are so appreciative of the donations as well as the support of our Kingsville Town Council and Parks and Rec for bringing this project to fruition.”

All photos provided by Kingsville Pickleball Inc.
YouTube video used with permission from the Town of Kingsville