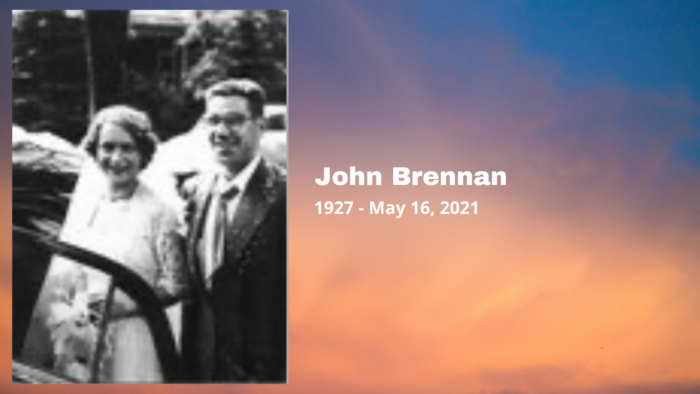 Passed away in his sleep on Sunday, May 16, 2021 at the age of 94. John is survived by his loving wife Hazel Leone (nee Turner) and children Barbara Brennan, Wendy Brennan Miller, John Brennan, Peggy Brennan, Mike Brennan and Mary Jill Hasson.

He has 11 grandchildren and numerous great grandchildren. John grew up in the Otterville/Norwich/Tillsonburg area. During his career John worked for Ontario Hydro starting in Tillsonburg then moving to Aylmer, London and Kingsville/Essex. Following retirement, they moved to Leamington, where he and Leone lived since.

Cremation has taken place. As an expression of sympathy, memorial donations may be made to Erie Shores Hospice (Hospice Erie Shores Campus) by contacting Reid Funeral Home, 14 Russell St., Leamington (519-326-2631).

Family and friends are invited to share their words of comfort or make a charitable contribution at www.reidfuneralhome.ca