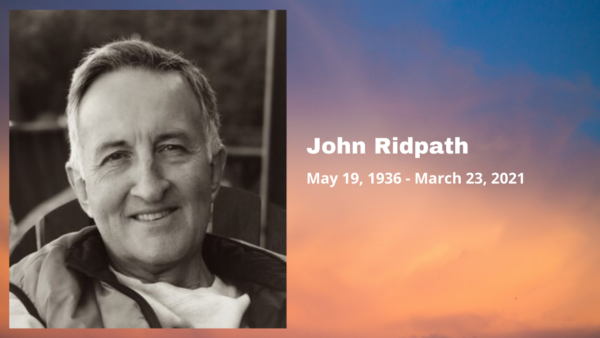 John Ridpath loved life. He was a grandfather, father, brother, and friend; a swimmer, a sailor, and a scholar; he was an adventurous spirit who travelled the world, and a passionate defender of the rights of man. And above all, he was an inspirational teacher whose greatest lesson was living itself.

John Ridpath was often described as a legendary lecturer who, in his 30-year career as associate professor of economics and intellectual history at York University in Toronto, inspired tens of thousands of students to have confidence in their own minds, think for themselves, and to live their lives with passion and enthusiasm. “Professor Ridpath” was beloved by students and described by the university president as “one of York University’s treasures.”

John Ridpath was an intellectual activist. He was a lifelong advocate of Ayn Rand’s philosophy, Objectivism, and he came to know Rand personally. His many lectures on Objectivism, and on the history of the American Revolution, were very popular within the Objectivist community. He contributed articles to The Objectivist Forum and served for many years on the Board of the Ayn Rand Institute.

From his education at Upper Canada College, the University of Toronto, and the University of Virginia, to his work on the renowned Avro Arrow and storied teaching career; from his journey to Mt. Everest in the company of Sir Edmund Hillary, to a white-water canoe trip on the remote Nahanni River at the age of 64; and from his beloved family and cottage on Canoe Lake to his second home in Los Angeles — John Ridpath lived a life of unwavering devotion to his values.

He was many things to many people, but he was unquestionably one of a kind. In the words of a dear friend, on the occasion of his 75th birthday: “You are always in your world. You always have been.”

John was pre-deceased by his devoted ex-wife Virginia and is survived by his sister, Joan (David); his three children: Jefferson (Debbie), John “Case” (Debbie), and Larkin (Rick); and his six grandchildren: Brittany, Olivia, Garrison, Jeffrey, Spencer, and Gregory.

In accordance with his wishes, John’s family will say their farewells in private, and a celebration of life will be held at a future date when it is possible.

If you would like to honour John, please consider a donation in his name to either The Ayn Rand Institute or the Friends of Algonquin Park.

Donations are being accepted for: THE FRIENDS OF ALGONQUIN PARK.