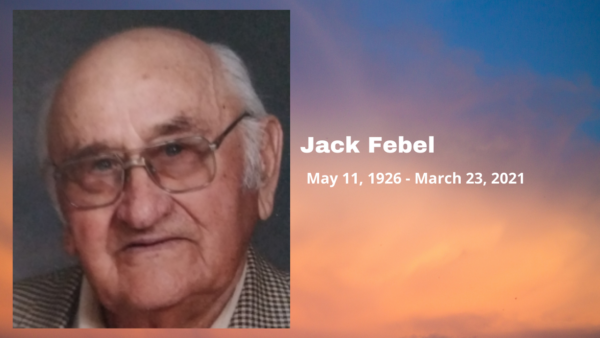 We are saddened to announce that Jack Febel, formerly of Kingsville, passed away at Rogers Cove Retirement Residence , Huntsville, Ontario, on March 23, 2021. He was born in the former Yugoslavia on May 11, 1926. He emigrated to Canada in 1949 where he met his future wife, Maria Gutwein.

He will be sorely missed by his son Peter (Barbara) of Burks Falls, Ontario, and his daughter Ingrid Smith (Tom Fitzgerald) of Clarendon, Pennsylvania. He loved being an Opa to his grandchildren Christian, Brian, Susan, Nicholas, Steven, Rudy, and Shelley. He was also a great Opa to Tyler, Kyle, Adyson, Lucas, and Wyatt.

In his younger years Jack was athletically inclined and enjoyed playing soccer. He was instrumental in organizing the first soccer team in Kingsville in 1952, the Victoria Sports Club. He was a member of the First Lutheran Church Kingsville and oversaw the day-to-day construction of the new church in 1990.

He was also a member of the Rhine Danube Club for many years. Jack was employed by the H. J. Heinz Company where he retired as a warehouse supervisor after 30 years of service.

Donations in Jack’s memory can be made to the First Lutheran Church Kingsville or a charity of your choice.

Donations
Donations are being accepted for: FIRST LUTHERAN CHURCH.