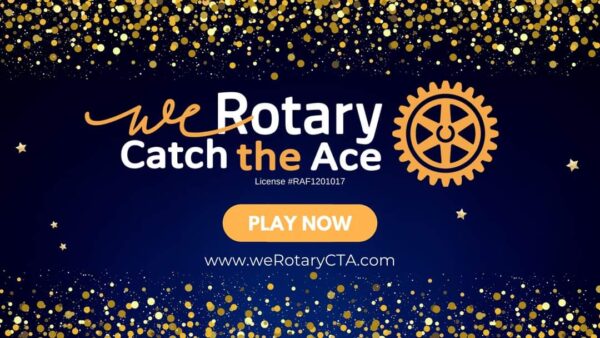 Three weeks ago the Rotary clubs of Windsor and Essex County launched a progressive jackpot lottery called WE Rotary Catch the Ace which turned out to be an instant success. “Due to the pandemic a lot of our traditional fundraisers had to be cancelled,” said Rotarian Crystal Heinrichs of Cottam. “We’ve had to reassess our future projects in order to continue to do things in the community.”

Catch the Ace is an online, virtual lottery which operates through a company called Ascend Fundraising Solutions.  Ascend has helped to raise over 790 million dollars for over 500 charities in Canada, the United States, the United Kingdom and now is working with ones in our own backyard.

The game is simple. A card is selected from a virtual deck and tickets are purchased through an online ordering system. If a person’s ticket is drawn they automatically win the Weekly Draw and their card is revealed. If that card is the Ace of Spades the person also wins the progressive jackpot which currently is at $5000.00. The game continues week by week until the Ace of Spades is found.

Draws are held every Thursday night at 8:00. “You don’t need to live in Windsor or Essex County or to be in Rotary. Everyone who is over the age of 18 and lives in Ontario is eligible to win,” Heinrichs said.

WE Rotary CTA has awarded over $2500.00 in prizes and the game has just begun.

For more information go to www.werotarycta.com.