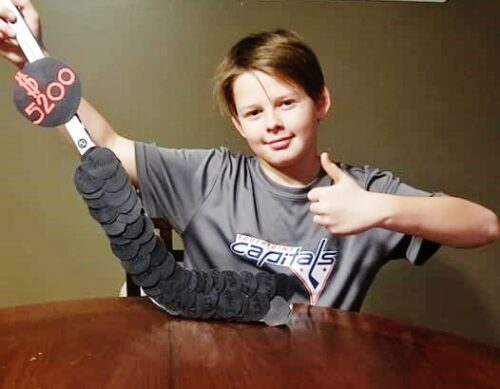 Susan Guenther has been helping her son Sammy raise money for the homeless with his Buck For A Puck fundraiser ever since he first encountered a homeless man three years ago. The fundraiser runs from October 15 to November 15 each year.

“April 2017 Sammy was in Toronto and came into contact with a homeless man. As much as I wanted to usher him from what I felt could be an unsafe situation he pulled and fought to go help this man. Later as he put his head to the pillow, he cried about how we didn’t do anything to help. And that first night led to months of him in tears around bedtime, about how we didn’t help.

“For his birthday, Sammy would ask his friends to not give him a gift but fill a backpack with things for a homeless person. We would deliver the backpacks to Street Help and Windsor Downtown Mission. Sammy visited the homeless shelter handing out a cooler of watermelon for one of his birthdays. Then Hockey started back up and it limited his ability to make way to the shelters and that’s when Buck For A Puck was born. Sammy is a goalie in hockey.

“Since 2017, during every October 15 to November 15 we ask the community to sponsor Sammy $1 for every save he makes during a game or help with a donation towards helping the homeless. The community has stepped up and has been so generous and because of the community Buck For A Puck was able to hand over:

“With the onset of COVID 2020 hockey season looks different and no travel hockey games are allowed. Sammy is still on the ice with his Erie North Shore mates for practice and skill development and sometimes a little scrimmage is formed. The homeless situation does not end or stop during COVID and so Sammy has decided to move forward and do the best he can to help get funds to the needy. During his campaign we are asking the community to once again lend a hand by sponsoring or donating to Sammy for each puck save he makes when a scrimmage plays out.

“All community gifts will be given to Windsor Missions and Windsor Street Help.” 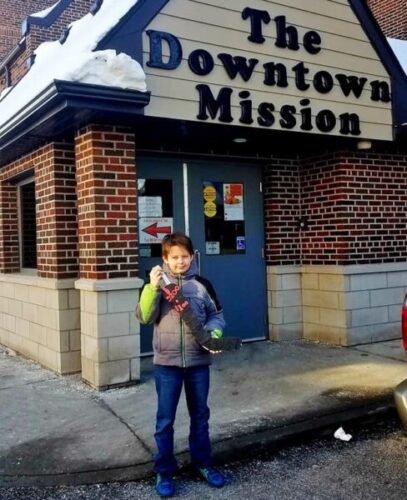 The Kingsville Times had the opportunity recently to conduct an interview with Susan Guenther. Along with being Sammy’s mother, Susan is also his cheerleader and his Number One helper.

Kingsville Times:
How did Sammy initially get word out to the local community for support?

Susan Guenther:
Through Facebook and in person, and this year we have added a GoFundMe page.

KT:
Has Sammy seen a steady growth in funds collected as more time goes on?

SG:
Each year he has collected more than the goal. This year may be different due to COVID, but we are still very fortunate and lucky that we are still getting donations and pledges. The fundraiser runs from October 15 to November 15.  We have a Facebook page that shows all his accomplishments and activities.

Yesterday the Windsor Spitfires, CTV Windsor, and Windsor’s Country all came to one of Sammy’s practices in Kingsville to support the cause.  They aired the fundraiser on CTV Windsor last night. 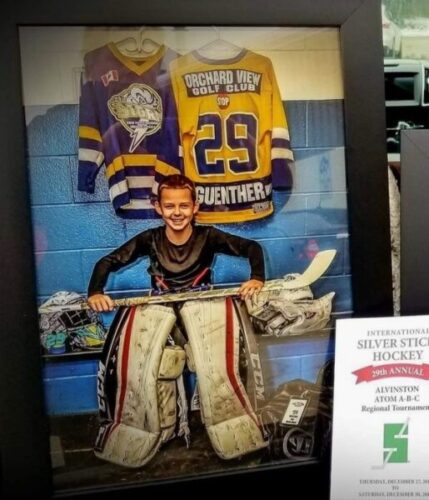 KT:
How did Sammy select the beneficiaries for the funds that he has collected?

SG:
We googled homeless shelters and saw that Windsor Downtown Mission was one. And then we also googled Homeless Help in Windsor and found Windsor’s Street Help. Both needed help so we selected them.

KT:
How old is Sammy now? How many more years does he envision running this annual event?

SG:
Sammy is 12 and we will continue as long as we can.  We will always keep trying to do something.

KT:
What are his future plans?  What does he want to do when he is older?

SG:
Sammy wants to be in the NHL — every minor hockey player’s dream.

KT:
Who are Sammy’s heroes?

SG:
Sammy loves Marc-André Fleury, who at the time when Buck For A Puck idea hit us, was playing for the Pittsburgh Penguins. Now he plays for the Vegas Golden Knights. 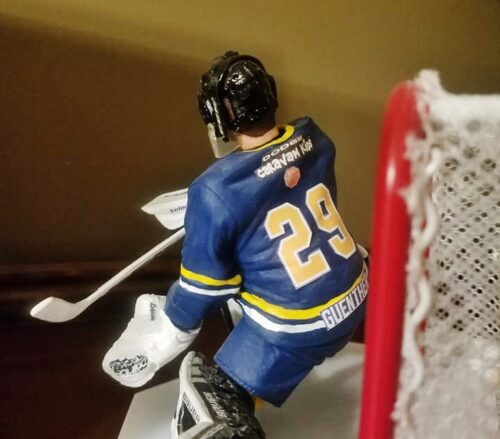 KT:
How can members of the community participate? What would Sammy like us to do to help?

They can message me, on the Facebook page or directly, and let me know if they are interested in signing up to pledge a dollar for each puck save he makes in a game or scrimmage.

They can donate directly —

Or they can give it to me. I will need to know the amount so that I can add it to Sammy’s final total.

Some people will write a cheque and give it to me to give to the shelters and I always ask the shelters to give a receipt to those who have asked for a tax receipt. 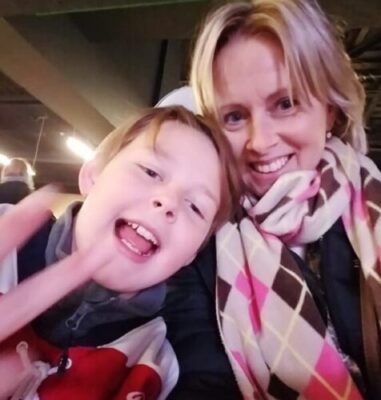 KT:
As his mother, how would you describe Sammy to someone who has never met him before?

SG:
Sammy has always been really in tune to feeling things that are happening around him. He is a very funny, energetic and industrious boy. He loves hockey and loves being a goalie. He will leave a mark on  you when you meet him, he is very caring and always asks a lot of questions.

He wants to understand everything and always looks deeper at things than what is face value.  He is not a materialistic person and loves to play video games.

KT:
Does Sammy come to you for advice on how to improve his fundraising efforts?  If so, what advice have you given him?

SG:
Sammy wanted to do something to help homeless people and was very upset when we were not able to the first time seeing a homeless person. For months he and I talked about that moment of time and what we could do to make it right. Sammy and I know the need is great out there and Sammy knows we need to do something,

I’m more of the gears for getting Buck For A Puck out to the public and look for help. Sammy focuses on more the game portion and what it could mean if he stopped the pucks. Sammy is inspired when he gets to deliver the gifts of money, he feels good for the shelters and he feels good that he could offer something. 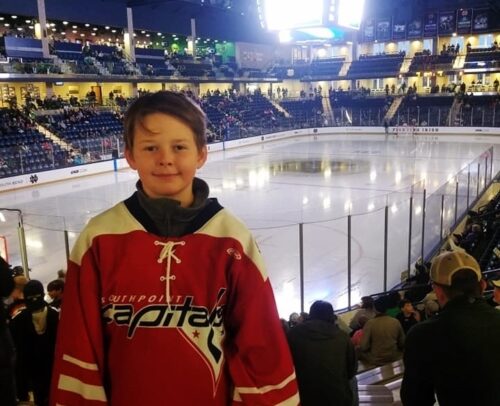 KT:
What do other parents and members of your community say about Sammy?

SG:
As anyone would be of a child who is inspired to help others, I am very proud — proud of the support — and so I’m sure other people would feel the same. When we see others helping then it quickly builds momentum and people start doing more, and the next thing you know, a new idea to help comes up — and that’s happened a few times.  It builds traction and as parents it is our job to teach our children to participate in the community.

They know they want to do something but not always do they understand the logistics of it all.  I can honestly say it has taught me a lot and has taken many man-hours to get it out to get the help we need.  So thank you for taking the time to help us raise awareness and funds. 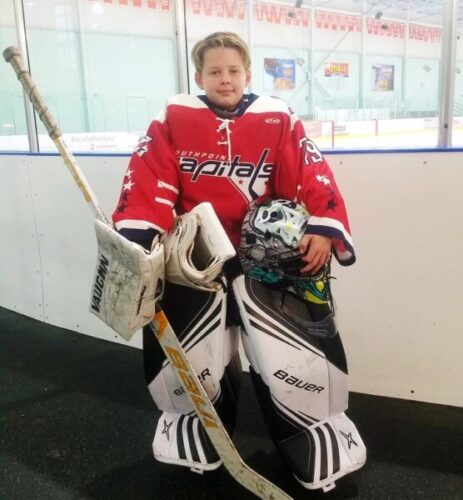 Sammy’s BUCK FOR A PUCK Facebook page.
All puck saves and updates can be found there, with a link to make a donation.

**If you know of someone in our community who deserves recognition for their charitable work, please send details to info@kingsvilletimes.ca.