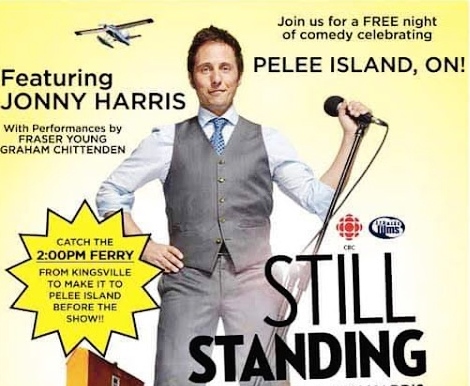 In the fall of 2019 Jonny Harris, along with his best friend Macy, full production crew, a team of writers and producers, arrived on Pelee Island to take a look at how the largest island in Lake Erie is “still standing.” Harris is host of CBC’s “Still Standing,” a show that crisscrosses the country taking a closer look at the small and rural communities that persevere no matter the odds that mount against them.

Pelee Island certainly fits the bill and is set to be the episode that launches Season 6 of this beloved series. Like many visitors to Pelee Island, the crew was curious about its history, what islanders do all winter, and why there is little development here. 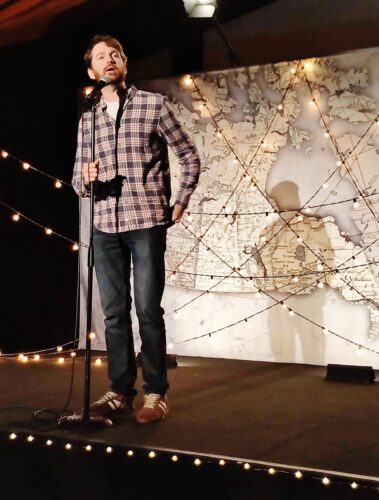 The week closed out with an evening of stand-up comedy built around the island at the Pelee Island Winery Pavilion with writers Fraser Young, Graham Chittenden and host Jonny Harris. A crowd of about 80 people laughed at and fell in love again with all the quirks the island uniquely possesses.

The crew got to experience true island life firsthand when inclement weather forced the ferry service to cancel the sailing of the island that the whole crew was on. The group got resourceful and revised travel plans, and even hitched a ride on a small plane back to the mainland.

Long-time Story Producer with “Still Standing” Shayla Howell says Pelee Island will have a lasting effect on her. “Mostly what stays with me is the genuine hospitality our crew received. Born, I suspect, from a deep love for this place and dedication to the island way of life.”

Howell declared, “I came to the island for work, but I will most definitely return as a friend.”

You can catch the Pelee Island episode of “Still Standing” on CBC at 8 p.m. on Tuesday, October 6, or stream on CBC Gem. 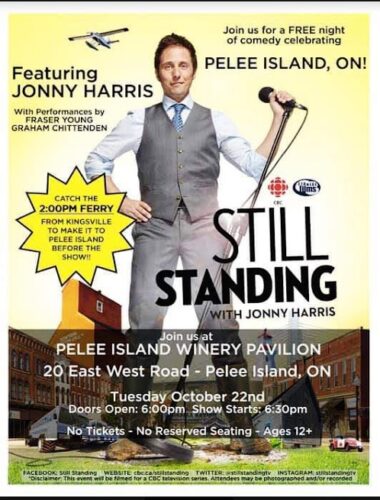