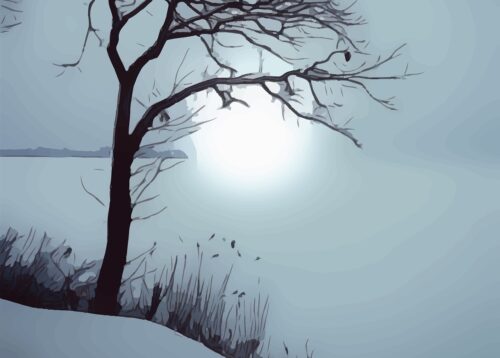 I answered the phone.  It was a member of the Livesey family informing me that kids were stranded on the ice. My dad and I drove to the lake.  There was a crowd and the Fire Department.

I asked a friend, “What’s the story?” and he said, “They have three of them.”

I then asked a policeman, who said that there were four of them at Dr. Bruner’s office.

When driving back on Division Street my dad said, “They won’t find the other one until spring.”

He decided to stop at the house and tell Mom. She was standing at the top of the stairs, and when my dad said, “They have three and they will not find the other one until spring,” my mom fainted and landed at my feet. I was shocked.

At Dr. Bruner’s there were three pair of skates in the foyer, a red flag for me. Down a hallway sat one of the boys. At the T, my dad went left and I went right. We both turned and wondered — where was my brother?

A nurse then said, “Oh, the other one is here.” She opened a door and there was Jim.

Patrons at the Lakeshore Terrace Hotel had had difficulty deciding if what they viewed were geese or people. I do not know who called the Fire Department. Clarence Ware and a co-worker were near the lake. They took a rowboat and rescued the kids.

I was told that because my brother stayed on the ice, he was able to help the three back onto the ice. When the split was small, they went into the water. I learned that their clothing froze to the side of the boat.

Image by Ed Zilch from Pixabay